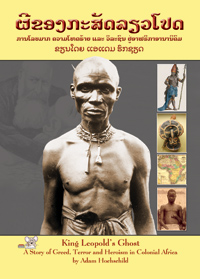 For more than a century, the biggest countries of Europe owned other countries, as colonies. Laos was a colony of France.

In Africa, the Congo belonged to one greedy man: King Leopold of Belgium.

He used cruel methods to make people in the Congo collect valuable rubber. His soldiers cut off people's hands if they, or their village, did not collect enough rubber.

This is the story of a cruel king, and the people who fought back against him. It is all true.